Export 56 are delighted to offer for sale this rare and beautifully presented 1968 Porsche 911 2.0S Soft-Window Targa. This car has undergone a 2 year documented restoration in our Newport Pagnell facility and has been completed in the highly describable colour combination of Slate Grey over Red Leatherette.

Supplied with a Porsche Certificate of Authenticity, tool kit, jack, radio, and owner’s manuals, this beautifully restored 911 2.0S Targa has it all—timeless design and brilliant performance.

INTRODUCTION OF THE TARGA

The name Targa, which translates to badge or shield, was selected as a tribute to the Targa Florio, an Italian race where Porsche was able to prove its philosophy that power was only one component of winning.

On the tight, winding roads of Sicily, high up in the mountains above Palermo, the superb balance and handling abilities of Porsche’s cars allowed them to consistently dominate their more powerful and heavier competition, namely Ferrari.  When it came time to name their new open-air car creation, and in keeping with their tradition of devising colourful names for their open air cars, Porsche quickly secured the Targa name as a registered trademark. 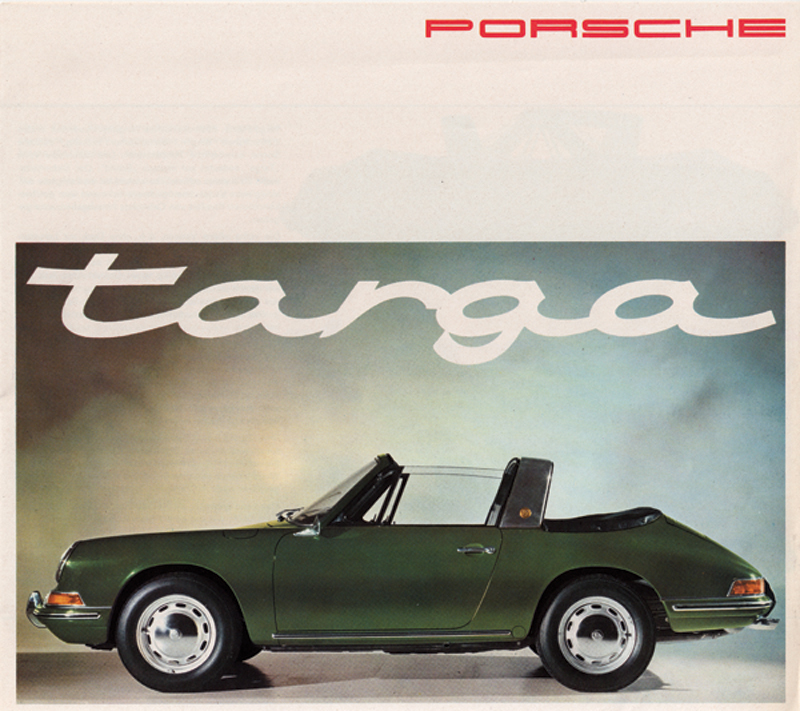 Another advantage the Targa concept offered, was that it made it easier for Porsche to comply with ever-increasingly stringent safety standards and regulations of the American market, which were especially challenging for convertibles.  Although not all purists were satisfied with Porsche’s new “safety convertible cabriolet” its built-in steel roll bar did reduce the rattles and squeaks that are typical with open air cars, and it also reduced wind whipping in the cockpit thus ensuring the dramatic hairdos of the era stayed in place. Consistent with Porsche’s obvious “form and function” design, the steel bar was sheathed in a matte or brushed, gleaming, stainless steel cover with subtle gold “Targa” script.

The original Italian car registration book shows this European-delivery example was supplied new as a Left Hand Drive model on the 22.June.1968 to its first owner who lived on the Mediterranean island of Sicily.

Coincidentally the name Targa was selected as a tribute to the Targa Florio, an Italian race which took place on the tight, winding roads of Sicily!

Unfortunately very little information was recorded on the Certificate of Authenticity, in fact only the chassis and engine number were documented.

The Italian car registration book shows Chassis Number 11850087 was originally purchase by Signore Licata who owned the car for 12 years. He sold the car on 22nd March 1974 to the second owner kept the car for over 30 years, enjoying the Southern Italian roads and wonderful climate.

The car remained in Italy until 2010 when it was acquired by a Porsche collector based in Belgium.

He came across Chassis Number: 11850087 for sale in Belgium, the car was in need a restoration but was complete and roadworthy. A quick dash across the English Channel and the car was purchased for 25,000euros and driven back to Newport Pagnell.